I will be a little late to work because it went slowly and I got up a little later than desired…but I RAN 5K this morning!!

Got up this morning to run…and it was FREEZING! But I ran…
…because I can do hard things 🙂

AND I ran longer than I was supposed to. I like having something to be proud of myself for.

Run is such a strong word for what I do.

I love the mental and physical sensation that comes from running.  I love the soreness that I acquire when I start running again…that is, when I go through a dry spell and jump back in again…because thankfully that soreness goes away once I'm in the zone.

A little over a month ago I was sitting around with some friends at a park in Old Town.  Late to the game, I jumped into the topic of "tell us about a dream that you have…"

Immediately I thought of two things:

"I want to get married and have a family, of course!"

Someone else said one of them, so I told them about another dream that I've had for many years, which is to run a marathon.  I also added that I wanted to go Hawaii, and someone suggested that I run a marathon in Hawaii.  I figure I could kill three birds with one stone by getting married, going to Hawaii for my honeymoon, and run a marathon while I'm there. 😉  I dream…I digress…

That afternoon I decided to sign up for a 5K.  Yea, I can't run a full 5K right now.  (ugh) BUT I am getting there, and more quickly than I used to!  (This is exciting)  I think my body is starting to kick into gear more quickly, and it's not considering running to be so foreign as it has in the past when I started again. Good thing.  I got off track for a few days so I skipped a few of my Couch25K training days and ran much longer than I was originally supposed to today.  I love when I actually do what I put my mind to.  It's the sort of day that I was super proud of myself.

One of my favorite things about running is all the ways God teaches me through it.  It never fails…there's ALWAYS a lesson to learn.  Plus, I am so that Chariots of Fire guy, Eric Liddell, when he says that he feels God's pleasure when he runs.  (Run is still such a strong word for what I do, so maybe I can just say that I feel God's pleasure when I jog.:)  I picture Jesus on the sidelines with a sweatband on his forehead and a shirt that says, "KimPossible iz my HomeGurl!"  He's not usually wearing a robe in those visions.

Today I decided to go out when it was late in the afternoon, and it snapped into darkness during the warmup!  The thing I love the most about the location of my living arrangement is that we have trails down GW Parkway.  Love me so trails, trees, nature…falling leaves now.  (sigh)  Except when it's dark.  I am the sort of person who could be voted most likely to twist my ankle doing nothing (not claiming it, just sayin'), so GW Parkway trails would not necessarily be my friend at night.  This evening I decided I wasn't going to care and that I'd just be extra careful. 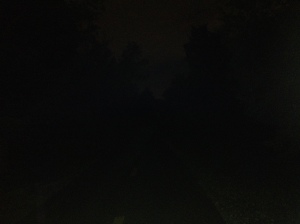 No joke.  That's an actual picture I took during the cool-down.

Then I tried to force the flash and got this:

This trail had some lovely little twists, turns and hills, but all I could get were glimpses of what was right in front of me, just a few steps ahead.

Such is life, right?

There are times when God makes everything that's coming very clear.  Other times all I get is a few steps ahead of me.  That trust in Him has to be pretty real.

"Seriously, God, are you sure this is the best road for me to be on?  I mean, can't we find a safer place to journey and learn a few lessons?  Perhaps one that would be less painful if (and when) I fall?"

"Sure, but you'd be bored," is what I think I hear Him say to me often.

There were times, tonight, that I would start jogging and wonder why it had just gotten harder, until I realized I'd just gone up a small hill without even seeing it.

Your word is a lamp before my feet and a light for my journey.

Sometimes I feel like I can't do hard things.  I feel like I get blindsided by little hills that I climb that I don't feel prepared for, but God tells me that I can do hard things (see Philippians 3:14 for proof).  It's my mantra for life right now.  If you see me walk through something tough and I look like I'm going to meltdown, feel free to simply say, "Kim, what can you do?", to which I will crack a smile and reply, "I can do hard things."  It may even look like I'm rolling my eyes at you, but don't take it personally…I'm really rolling my eyes at me.

Yes.  I have that as a screensaver on my phone.  A girl can never remind herself enough about WHO she is.  ;-)

While I was jogging through one of my last stints tonight, a non-running song came through on my phone, but this was a song I just don't turn off when it comes on, so I slowly jogged to a slow song. It's this Bebo Norman song that I have LOVED since college; it's the song I want to walk down the aisle to at some point in time when a man decides to be captivated by all this redheaded awesomeness.  God reminded me, once again, that even that part of my journey will have more answers someday, and even that dream will come true as well.  Even though it's hard to wait, I can do hard things.

In two weeks I will have run myself a nice little 5K, and will begin training for a 10K…because I can do hard things.

Even if I have to run in the dark, I will do so with only a few steps ahead of me illuminated…because I can do hard things.

And I will become a runner…because I can do hard things.

If anyone feels called to sponsor my trip to Hawaii, I will accept…because you are awesome.  (That didn't go with the poeticness of the last few lines, but figured it wouldn't hurt to throw it in just in case. 😉

Follow Memoirs of a Redhead on WordPress.com
Growing... Yup

alive in the moment

because redheads have more fun

because redheads have more fun

Life can be boring and overwhelming. Hopefully, I'm not.

Think with me daring things